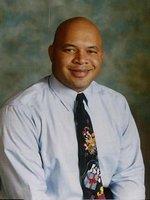 Originally from the tropical island of Puerto Rico where he grew up playing baseball, basketball, track & field, and volleyball. He graduated high school with a 4.0 G.P.A. in Yabucoa, Puerto Rico earning an academic, a volleyball, and a baseball scholarship to come to the United States.  He came to the United States and played baseball at Chipola College in Marianna, Florida, then the University of Montevallo in Montevallo, Alabama. He earned his teaching degree from the University of Alabama at Birmingham. He earned his master's degree from Jacksonville State University.